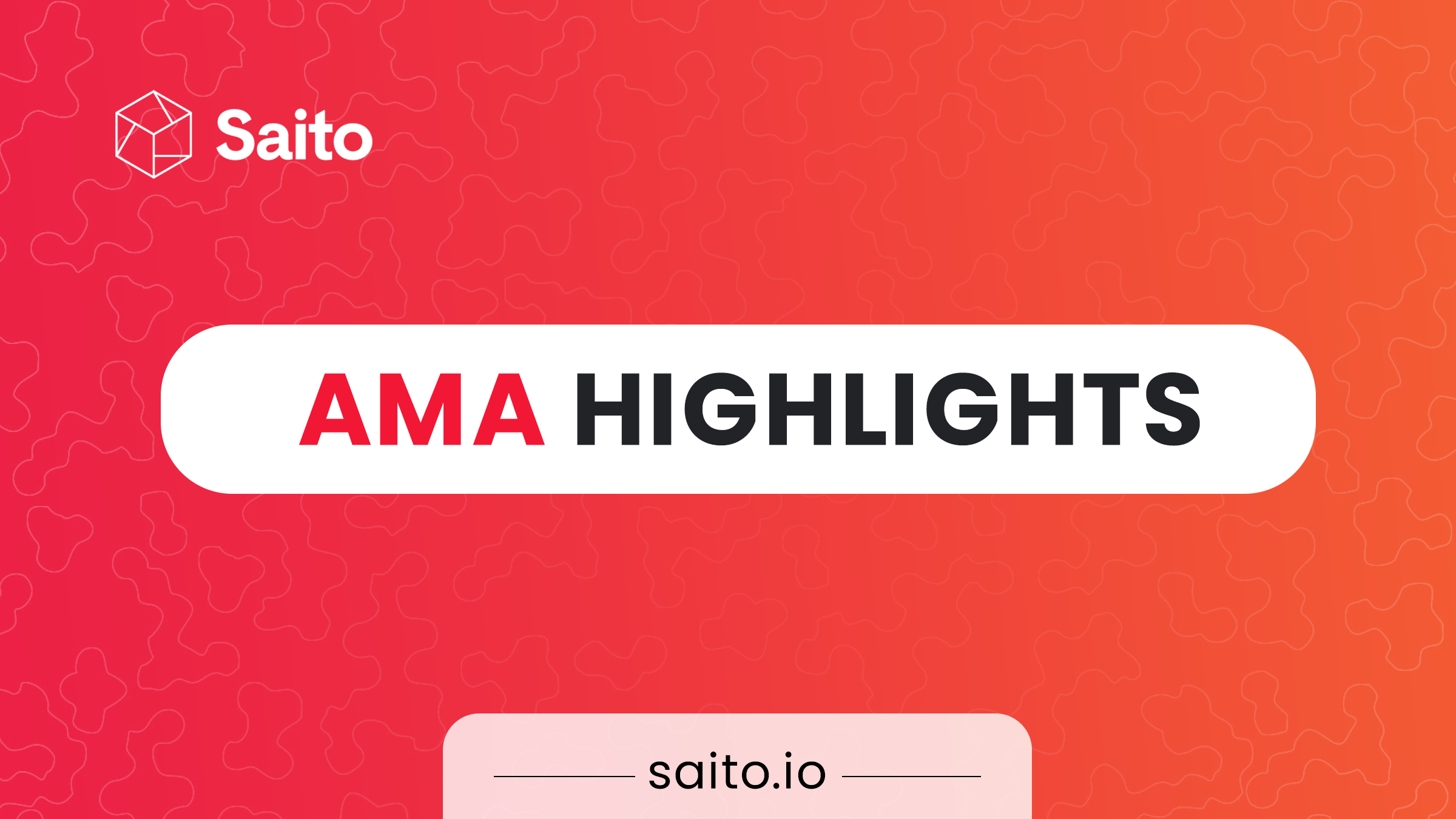 Saito’s Co-founder Richard Parris had great AMAs with Mandy Community and Hotbit Exchange on Telegram on December 28th and 29th separately. To those who missed the AMAs and to those interested to learn something about Saito, stay tuned as we curate the highlights of his answers in this AMA recap.

1. Who are your competitors in crypto and what’s the strategy to outperform them?

We still have a unique approach – Saito consensus is not implemented anywhere else, so in that sense we don’t have direct competitors.

There are quite a few competitors in the ‘ideas space’ around scale. Polkadot, for instance, solves scaling issues for the relay chain, but passes on all other issues to parachains, while groups like Solana and before them EOS juiced up speeds by centralizing validation.

Other sharding solutions split up the problem to push it further down the road, but lose fundamental properties like ‘universal broadcast’ – being able to send a message to anyone on the network without any help or dependence on anyone else.

2. How important is the community for Saito team and what steps will be taken by team to keep interest of community & investors intact?

Our community is everything. Saito is like bitcoin or ethereum, and is nothing without a community.

The community is amazing – you just have to look at how the saito ‘red card army’ on twitter supports everything we do/announce.

More than that – the community is doing a _lot_ creating docs, making NFTs, promoting Saito… This is maybe the most amazing achievement of the project and something we will keep supporting as best we can.

As mentioned above – Proof of Work and Proof of Stake pay _only_ for the security mechanism. To avoid web 3 collapsing back into being just like web 2 we need to pay for everything the network needs from consensus. If it is not, it is subject to ‘capture’ by anyone with power or an advantage in the system.

By rethinking what consensus pays for, and making that robust, Saito can provide infrastructure, pay devs and service users at scale – without closing off access or becoming corporate owned.

4. With many Blockchains, we have seen the issue of 51 % Attack, how do you plan to solve that? Can You give us an overview?

There are actually two reasons that PoW and PoS suffer 51% attacks. First, all the work/stake that does not ‘get used’ each block, just vanishes for the next block. The second is that the block creator gets paid for creating the block, and so can use this reward to ‘go again’ with their attack on the next block.

Together this means, that when a node creates a block, other nodes are already have some transactions and fees for the next block so the attacker is behind the honest nodes, and, most importantly we didn’t just pay the attacker to keep attacking the network.

This is maybe in the weeds, happy to talk more about this separately for anyone interested.

5. Please tell me some significant advantages of your platform over PoS and PoW, and how it can strengthen the security for users? What improvements or acknowledgements have you gained so far?

Along with all of the above – the biggest advantage is that Saito can actually be very simple, as it’s solution is not smart contracts, sharding, zk snarks or other ‘heavy tech’.

Very early on – we got a javascript version pushing two 300mb blocks per minute across the pacific and staying in sync.

Since then Saito networks have supported millions of transactions, and we have created exciting software on top of the network that gets people coming back.

6. One of the common misconceptions about Saito I see is that newcomers think it’s a “Polkadot project” or “Polkadot token.” Can you explain what kind of role or roles that Saito would like to play in the Polkadot ecosystem?

This is a common misconception because we have worked closely with the web 3 foundation and have many partnerships and friends in the polkadot ecosystem.

We have received and completed a web 3 foundation grant, for example.

In the end, Saito can be a massive part of the polkadot ecosystem, providing infrastructure to great projects that don’t have infrua to support them for free.

The Rust client and Rust consensus are steps to making Saito ‘data center ready’. As the network grows and throughput increases, we would need to move to things like binary blocks (rather than json).

At the same time – we have been refining and improving how we implement Saito Consensus in code with each update and refactoring of the code.

The Rust client represents our most efficient and robust implementation of Saito Consensus yet.

Changes like moving to binary for all network communications, and the extra strictness of Rust cause some issues for the rest of the stack, like games. We are working through those now, as well as settling our more detailed tech roadmap for the year.

8. What’s your vision ultimately? What is the project trying to achieve in the longer term?

To deliver the promise of Web 3.

Users are freer and have more power if they use keys they control to access systems and interact. Similarly tokenisation allows for users to share value autonomously and without permission.

But this is not Web 3 by itself. If we look at the best examples we have currently they are subsidised by volunteers and companies. For example, Uniswap simply does not work without support from Infura and their servers.

Volunteers don’t scale. At some point they will not support paying for a large scale network. Which leaves companies. With scale, costs will increase, and over time we will see Web 2 business models creeping in.

If we want a Web 3 that stays open at scale, we must solve issues of paying for the underlying network from consensus. This is what Saito does.

9. How do you deal with pump and dump investors who just buy and sell regardless of the technology behind it? In other words: how do you plan to gain the trust of all kinds of investors?

The answer to this is to get on with building a community and a track record.

We have an amazing community that understands and supports Saito, our goals, and objectives. This buffers and protects the projects against the ups and downs of industry trends and markets.

When that is tied to a track record of building real code, and being honest and open about what we are doing – it becomes clear that there are much better ways to be involved with the project than making small profits day trading a token.

We have recently published a detailed roadmap covering 2022 and beyond.

Technically we are working on our rust ‘data center ready’ client, working on tools to let developers easily integrate third party cryptocurrencies into Saito and Developers tools to make it easy to build apps for Saito.

In terms of growth, that is driven by two main things – community and collaborations. The Saito community is amazing and is spreading the word about Saito globally. It is growing in size but also commitment and passion, which makes us super happy. We are brining on community management

Integrating other cryptos into Saito – in a way similar to the way polkadot tokens are already integrated into Saito applications will allow us to engage on a deep level with projects throughout the industry and simply demonstrate the power and value of what Saito brings to them.

On top of this we will continue to communicate as much as we can about what we are doing. We are really pumped about 2022.