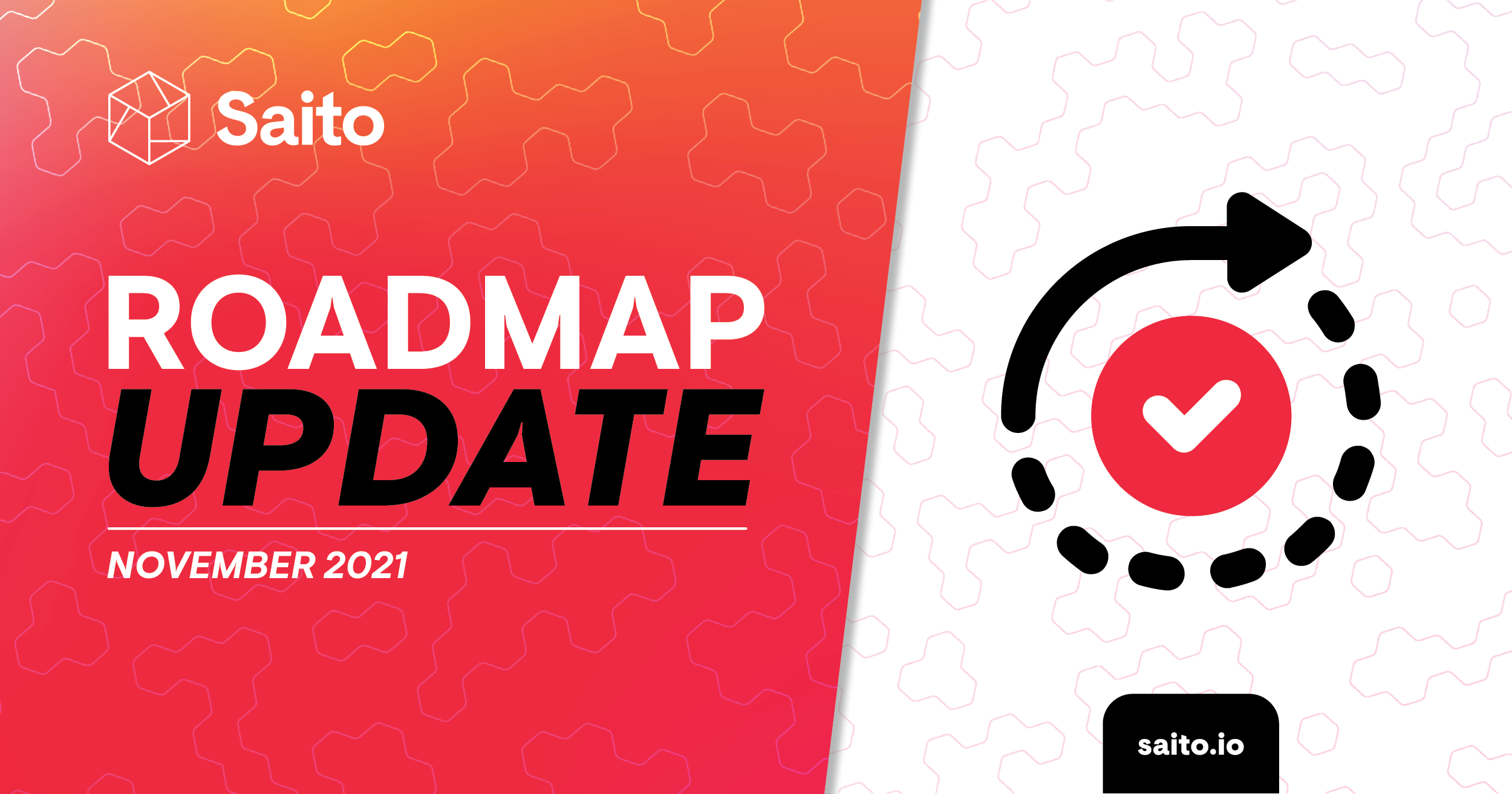 Today we are pleased to share our roadmap and vision. For clarity, we have divided our work into Four Eras which move from a focus on underlying software to an open public ecosystem. 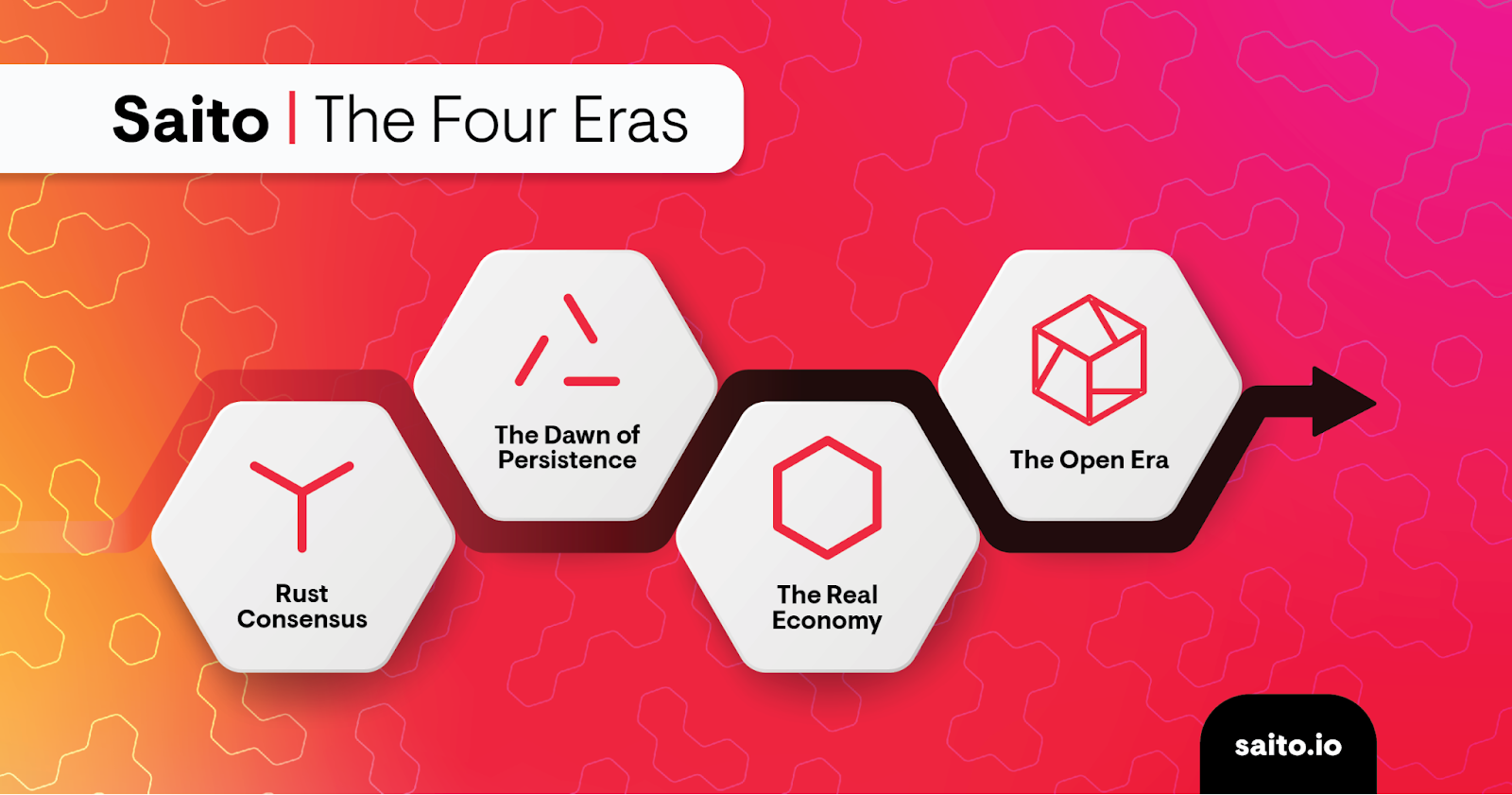 At the end of November 2021 our Rust client should join the network. At roughly the same time we will deploy an upgraded javascript client, giving us two different software stacks that will participate in Saito Consensus. This is a real challenge with our application layer executing almost 40k transactions a day. The transition period will be brief to avoid disruptions to growth and gameplay.

Our expanding core development team will continue to focus on upgrading and testing core software during this period, iterating and refactoring to simplify our architecture, and ensure components like staking are mature enough that we will be able to guarantee token persistence within the era to come.

The most visible progress will be in the Saito Arcade, where we will release new games, and upgrade existing games with more visual polish and better gameplay. We will have at least one developer dedicated to the Saito application suite by the end of December, and are hiring to extend this work.

The capstone feature of this era is extended “web3” support that will bring low-fee support for integrated cryptocurrencies into the Saito Arcade and all other native applications. Crypto-integration will start with communities where we have partnerships.

Marketing will continue with an emphasis on our core messages around fundamentals. Focus will be on providing expanded liquidity and trading options. This period will reach its conclusion with the end of Saito’s ERC20 token vesting, at which point we will have the zero-inflation token supply necessary for making the economic decisions that kick-off our second era.

The Dawn of Persistence

Token persistence will become a reality during this era. Staking, while having been possible for some time will begin to earn rewards and token persistence will also come into play. This could include starting with persistence for larger token deposits in the staking tables and gradually reducing our reaping threshold over time as we hit development milestones.

Transaction volume will be ramped up through crypto-by-crypto integration into our software stack. Our team will begin development of an advertising faucet and ecosystem. Token allocations for initial staking or advertising purposes will be low and non-disruptive: intended to test the economic model and provide initial support to developers rather than drive scalable economic activity and growth.

A Developer SDK will be launched enabling a switch from internal “dog-fooding” Saito infrastructure to promoting third party development and outreach activities like hackathons and incubated projects. It will be possible to run infrastructure on the network that will keep in sync with our machines across any necessary software upgrades.

Zero-inflation and growing transaction volume makes this a good time to extend coverage into larger exchanges and trading ecosystems. COVID permitting we will be more publicly engaged at conferences and other events in the blockchain industry.

We begin to scale up our incentive design to incubate a scalable real-world Saito economy. With both staking and faucet operations tested, and token persistence gradually expanding, distribution plans and curves for remaining mainnet tokens can be locked-down or a burn schedule set.

Core development will finalize consensus variables such the burn-fee algorithm, block time and advanced features like congestion management in the light of real network conditions. The team will establish a transparent roadmap for long-term network upgrades with the community.

In the application-space, non-project developers will have the ability to easily build and launch applications. Our advertising faucet will provide users with tokens necessary to use the network and incentivize node operators and developers to support public infrastructure.

L2 infrastructure: transaction archives, advanced block explorers, app stores and easy deployment stacks will get serious attention. For the first time the majority of these will be run for profit by independent node operators. Users, in turn, will have simple options to choose and switch between providers.

Saito is well known and the project moves to setting the agenda and running its own events.

Core development work continues on advanced features like L2 EVMs and base-layer scripting support. Wallets and applications are advanced and decoupled from the nodes that deliver them. Nodes are run by diverse operators with no predominant provider. Independent software implementations will start participating in the network.

Development is increasingly external and community-based. We seek to retain leadership in technical development and advancing the protocol to provide a coordinating function as routing capacity grows.

Project-released software is likely significantly forked and funding can be considered for private-sector development for use cases that will further drive transaction volume and increase security.

Founders and core team continue to be major supporters of the network, but work toward removing any dependence on their roles. Existing entities will be dissolved and any remaining governance moved to a Foundation, staffed by OGs from a variety of backgrounds and who understand Saito and the long term interests of the chain and consensus.

Unallocated tokens will be burned or locked-up.