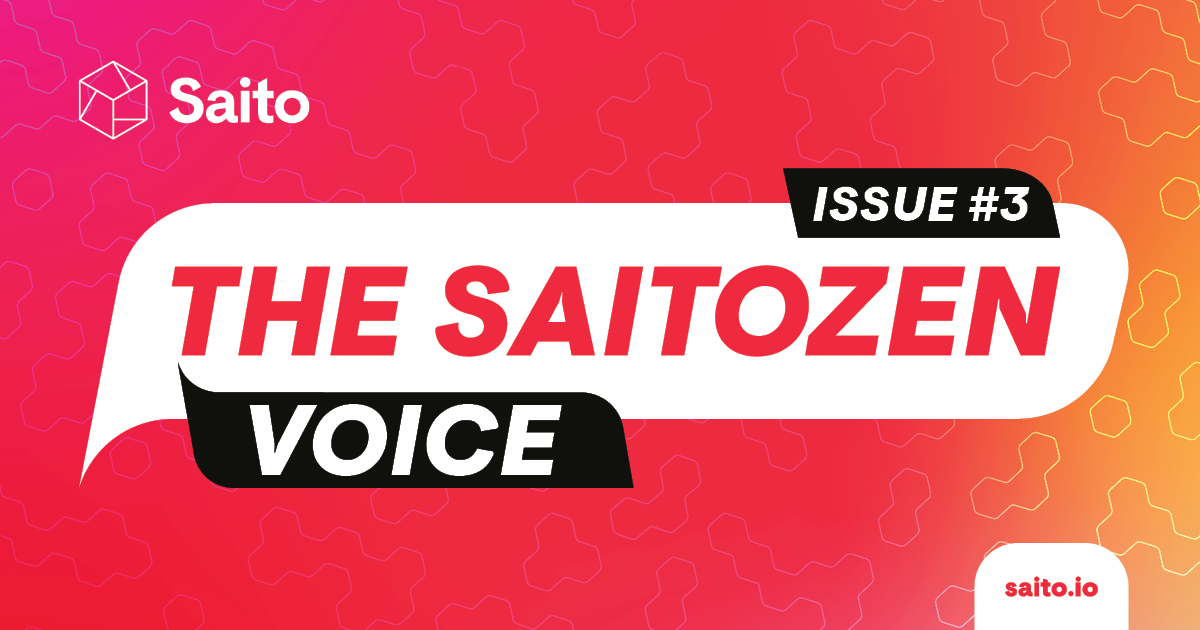 Welcome back Saitozens! We are here once again highlighting the best inquiries and discussions going on the best community in the blockchain space, the Saito community! Let’s get right into it.

With the completely different approach to economic incentives and security, what are the potential weaknesses/challenges to bridging the gap past the point of circular attacks? In other words what ideal is Saito giving up to realize the other ideals of this approach?

A superficial answer would be something like: Saito sacrifices the freedom for nodes to conduct sybil attacks against each other in exchange for eliminating the 51% attack or we sacrifice routing nodes’ ability to sell future-income flow from the work they do (i.e., rent hash / stake) in exchange for the ability to pay nodes in the routing network. Are these trade-offs? Not really.

A deeper answer is that much of the “technical trade-off” schtick comes from PoS devs who know they are introducing problems but need to justify them and so argue that their compromises are equivalent to problems in PoW. Adding a round-robin PoS network adds finality by creating a closed network layer around block production, for instance, but merely moves the 51% attack to the open voting-layer that wraps the block-producer-set. PoS conceptualize their problems as technical rather than informational/economic, so they don’t realize that the cause of their problems are deep irreconcilable problems involving incentives and openness at a very fundamental level — if the incentives are bad, you can’t address the problems they create without a mechanism of closure or governance that can prevents people from taking advantage of them. And those mechanisms that add closure add problems if the entire point of the network is its openness.

From a Saito perspective these devs are playing a nonsensical game. They move the openness elsewhere (we’re voting on who gets to participate in our closed system!) and call it a trade-off. They invent new words for closure (governance) that don’t carry as much baggage. Or they arbitrarily change economic variables to force changes in incentives and necessarily sacrifice openness there as now developers are dictating spending instead of an open and competitive work-production mechanism.

There are these problems getting caused by issues they can’t fix — like differences between “who gets the money” and “who does the work”. And they need to add closure to solve them in specific cases, but that turns them into permissioned networks. So they move the openness elsewhere through technical chicanery. And you can’t do that — you can’t trick market participants into understanding their incentives because they only care about ROI not about how it is structured. So they are stuck just moving the problem around and adding layers of wrapping and redirection and complexity because they can’t simultaneously have openness and closure and need to have both.

No-one has come up with a critique of Saito that does not apply to Bitcoin. The worst I’ve heard is that you can spend money to attack the network because there is no external market (for hash or stake) sitting between us and the right to produce blocks (although that isn’t even strictly true, because we can also do things like require chains to have a certain amount of golden ticket support etc.). So there is the possibility of these economic attacks, except they are much, much, worse in PoW or PoS, as cost-of-attack in those networks is half of fee-throughput in those designs, and Saito is much more scalable and so can promise much higher fee-throughput generally. More money to secure the network and more efficient leveraging of that money to generate cost-of-attack.

We can talk about this if you want. Or anything else you are concerned about. Most people don’t like to think about this stuff because they black box “mining” and “staking” as magical boxes that provide “security” instead of circular economic engines that turn money into more money (and can be gamed in various ways). I think once we take seriously the reality that building a blockchain is building an economic system (i.e., where fees buy work and ROI is the motivation for workers to generate work) then Saito may be the only blockchain without fundamental tradeoffs. I haven’t seen another design that just works the way

Any thoughts about Miner Extractable Value with respect to Saito? I was wondering if the dynamics we see at play in Ethereum would be discouraged in Saito consensus.

Smart contracts are L2. Saito consensus doesn’t have an opinion on what happens L2 — it’s just data attached to transactions to the L1 blockchain. If reorganizing those in plaintext allows people to cheat, maybe L2 EVMs could switch to expecting users to submit encrypted data of some kind. That would probably require some kind of closure to be effective, but it’s more of an L2 concern than anything we are really focused on.

Is the present Saito website running on the Rust client or will it be transferred once it’s finished?

Rust Client isn’t going to be full featured like the current JavaScript version. It won’t run applications. Just manage consensus and maybe have a very lightweight wallet. As part of the dev effort, we’re evaluating different kinds of changes and upgrades too. These changes aren’t necessarily huge, but they mean that once we get Saito-Rust done, we will have to upgrade the JavaScript version so that they agree.

My guess is that we get Rust running and upgrade the JavaScript version and basically pit them against each other. The applications and stuff keep running on JS and we see where we are and what our priority should be.

How is governance quorum met? What is the mediation process for upgrades added to protocol layer?  (Such that upgrade 1 and upgrade 2 benefits different groups of people but cannot both be implemented).

I’m not sure it is even theoretically possible to prevent people from forking — if someone can change the code, they can surely change whatever meta-rules that prevent forking.

Do you mean burning money and trying to create a competitive fork that way? it is possible, but it is also possible in networks like Bitcoin — an attacker with 51% of hash power can switch back and forth between mining on two chains and create deep reorg-thrashing attacks — as soon as the honest network starts building on one chain, switch to the second. and then back.

We have a couple of strategies available that can really ratchet up the cost of block production. But I think our core strategy has to be maximizing the cost of that attack rather than making it impossible by adding mechanisms that also make it impossible for the honest network to burn attacker tokens and fork defensively if needed.

I suppose the goal of “governance” would not be to prevent people from forking, but to discourage it by having some form of mediating disputes but I don’t really like to talk about “mediation” and blockchain in the same sentence

Yes, if we have a mechanism that we can use to mediate disputes that does not add closure, why not use that mechanism to determine the longest-chain and avoid the need for mining/staking?

I don’t think Saito’s approach locks us off from using any sort of meta-consensus mechanism. The expectation that we can do this sort of thing seems to be a PoS thing — seems to require us to have already accepted that voting mechanisms with majoritarian attacks or halting attacks are OK.

Is the information on https://www.crypto51.app/ accurate? Theoretically it would only cost $1,159,031 to 51% attack bitcoin? this seems rather cheap, what is actually stopping people besides cost from 51% attacking BTC if this is theoretically how much it costs?

It’s worse — all those numbers are conditioned on the assumption that an attacker needs to buy or rent enough new hash to find themselves in control of a majority over the existing hash.

The problem is that 51% of the hash exists by definition since 100% of it is already hashing. So the cost is < 0 by definition. People are worried about chain reorgs a lot more than they’re worried about incumbents monopolizing the chain by quietly discriminating against outsiders in ways that slowly centralize/cartelize the chain.