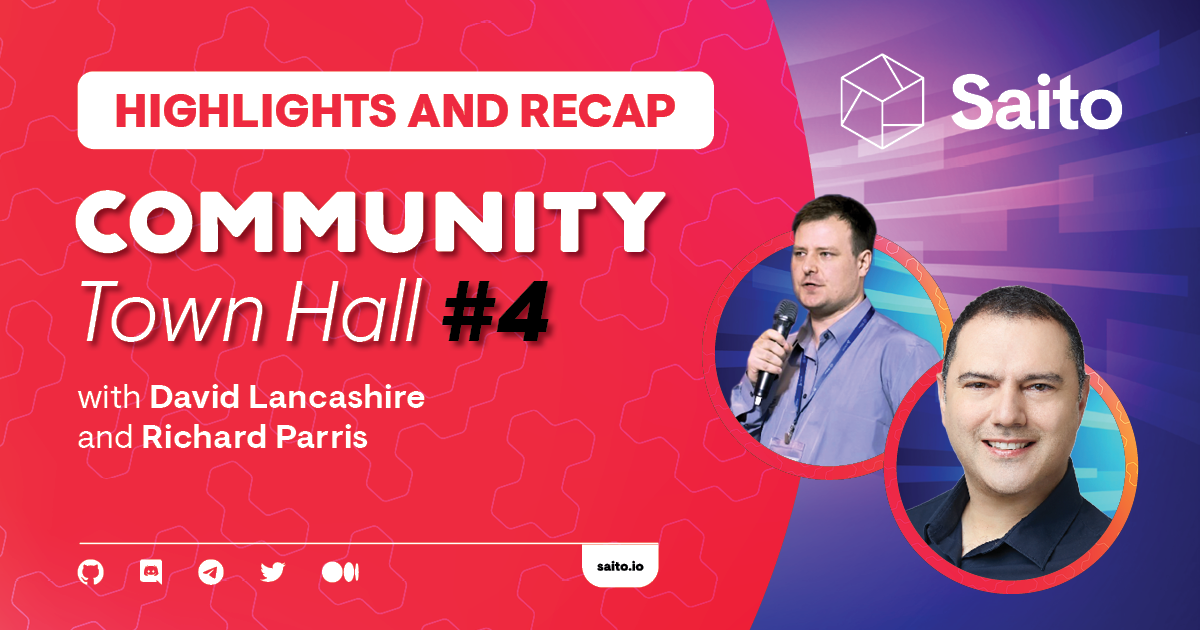 After taking a one-month break to host the Building Web3 event Richard Parris and David Lancashire are back to once again host the Saito Network Town Hall and catch up on everything that has been going on with the project and the community during that time.

Raja: The current circulating supply is much smaller than the max supply. At what time will supply be increased?

David: The token distribution and supply are the way they are because of the way the IDO had to be handled with Polkastarter, that community expects that kind of breakdown. That doesn’t mean we know for sure what exactly we are going to be doing with the 70% that’s allocated, we’ve got rough carve downs, we don’t even know necessarily if these tokens are going to be released. What we don’t want to do, however, is commit to a public strategy for releasing them that is counterproductive to the goals of what we’re doing. That might be something like a really bad pay-to-play strategy, where you buy traffic, and you buy a two-month pump and then the tokens dump because you flooded them out to people who aren’t using the network. The roadmap is going to talk about tokenomics but to give you a sense of what that is; we’re looking at having the token supply increase relative to usage on the network and activity, we understand that token price is something that is a really powerful marketing tool, and we think it’s important to be sensitive around that.

I’m not sure how much more specific we can be other than there is a portion that’s the community foundation, we have no idea how we’re going to manage that, we’re hoping to work with you guys and set up some kind of foundation, it’s not something we’re dealing with yet because people approach these questions when they’re thinking about DeFi and they’re treating Saito like a DeFi thing instead of what we’ve really got, which is we’ve got the Bitcoin distribution problem but we don’t have a block reward, which it’s a challenge, but it’s also positive because I think people are beginning to realize, especially in the last two weeks, that we don’t have a block reward with extra Saito hitting the market every hour, and the activity and the interest really are being driven by the expansion of people learning about what we’re doing.

You can expect details, the broadest picture is the faucet that we’re really interested in is the advertising faucet, we want to be bleeding tokens out to people who are using the Saito network through an advertising network, so if you’re using the Saito applications and you install an advertising module, you are now slowly getting tokens in because we’re showing you ads. Ideally, we can spin that off onto a separate company or get someone who’s not the core team to independently manage that but for that to work, we need to get the applications and the usability to the point that people are actually coming and that’s why we’re particularly happy with the organic growth and we’re looking at this stuff.

I think the people that are really concerned about this are coming from a DeFi background and they don’t know what we’re doing and they’re new to the project and they’re like “hey, is there a rug pull coming?”. Six months ago, we got a lot of that on the night of the IDO and there were questions because Saito was just a token people didn’t understand. The important thing is that we get the circulating supply and the distribution strategy in tandem with the growth strategy so that it pushes the network instead of crippling it. We’re not interested in committing to something we don’t need to unless we know that it’s rocket fuel behind us, all of us. I will say focusing on that short term might not be productive because token persistence needs to be there for every token in really small amounts before people should be worried about anything like that and we’ve still got time to go before that.

Trevor: The Saito BEP20 token contract is from Anyswap and not the Saito team, are you guys releasing a BEP20 Saito later or will you use the one from Anyswap at BSC?

Richard: This is a really important question and the first thing we’ve had to do is make absolutely sure that the Anyswap contract is secure enough to be involved with it. We’re happy on that account but we’re still treading carefully because of these exact questions. Our biggest concern here is it suitable for the community? are we putting people at any risk are we exposing them to any situations that aren’t good for them? and that relays into what’s good for the project, so we have no objection to locking up some of the ERC20 Saito as a BEP20 Saito of our own contract making if that’s going to help people.

Our next step is to survey folks set some thresholds for how much Saito we want wrapped on the BSC chain before we think it’s worth putting project time and resources into pursuing something there because I don’t think anyone on the project wants us doing a big effort to get something to happen and then it’s not serving any big purpose for the community or the project. So obviously usability and safety, security first then is it a need that the community has? and we have to balance that with obviously the core dev and those sorts of things but also with looking at centralized exchanges if that’s more suitable for people and other partnerships. So, no objection to a BEP20 Saito token, obviously we have a completely secure smart contract, we could do that with that we’ve already used for the ERC20 but that’s time and resources and execution we don’t want to necessarily deploy until we know it’s going to help enough people to make it worthwhile.

David: We need to get this Rust out and Saito-lite Rust, it’s a private repository now, so once they’re live and they’re capable of supporting, we need to throw them at each other, we’re going to need a bit of time to make sure that they’re not imploding and then when they’re smooth enough we need to be able to migrate the Arcade and the transaction volume onto the new software client. I don’t know how long this takes, bear in mind we’re onboarding new developers at the same time we’re probably going to be dealing with refactors of various components at various times, what we’re looking at is bringing the token permanence on basically the same way that Kusama kind of does it with reaping. You guys can think about it let us know what you think, because this is a useful thing for us to be talking with you about. The idea is that we will be guaranteeing token balances on the network at a kind of falling level, so someone who has a big balance in the staking mechanism; if the network gets reset we will guarantee that those tokens are there when it’s reset but we don’t need to worry about someone who has like a 5 Saito token balance, so that kind of stuff doesn’t need to slow us down, and what we’re looking at is we’re trying to figure out does this work? how does it work with things like the token release schedule? and when we can be saying look we’re going to be guaranteeing various levels and how quickly it falls so that’s the general approach and I think the dates get fuzzier the further out we go.

Richard: That’s one of the things you can say, kind of like quantum physics, the more definitely you give a date in software development the more you have to pad it for security and you’re still at risk of overrunning it because software development requires the iterative working towards the point and you discover things along the way, that’s just the way it is, so what we are most keen on doing first is getting the messaging out there, what the stages are and as much information as we can about timing on those as we can, letting people know what targets are, etc. We want to be as open and transparent as possible, but we need to be careful with messaging because things get away from you as soon as you say something in this field.

For those who missed the live meeting, you can view the town hall recording here.