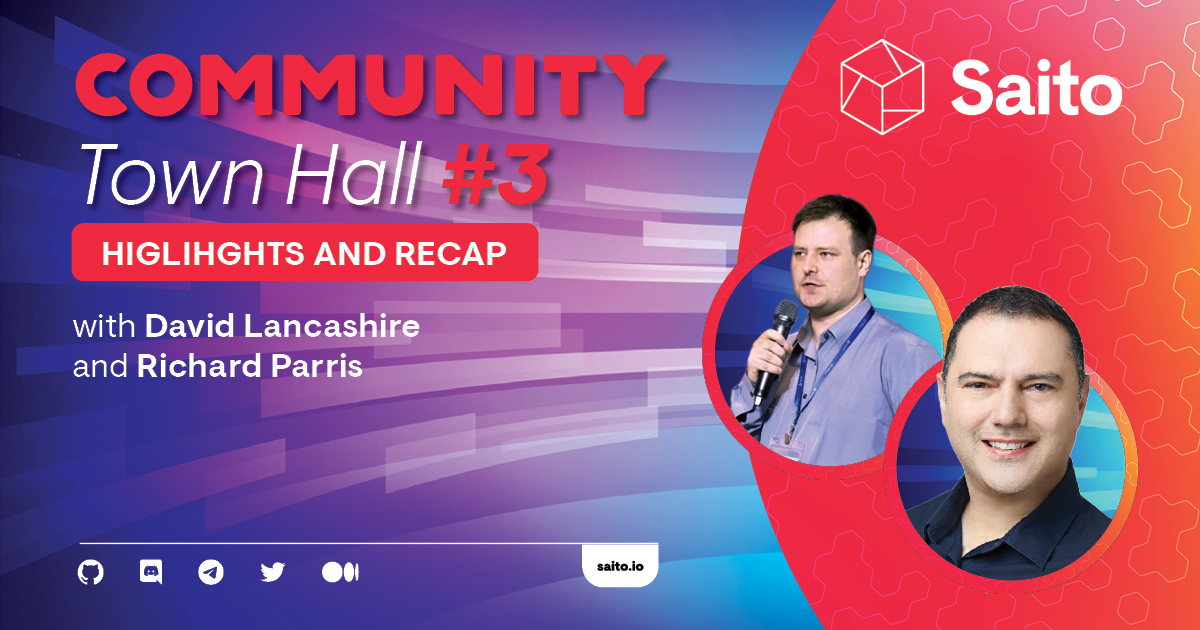 The Saito Network just recently held its third monthly Town Hall, hosted by its founders Richard Parris and David Lancashire, here you can find a summary of the updates they gave to the community and highlights of the questions asked that evening:

Sergeant Saito: What are the possibilities of a Saito mobile app?

David: It’s a question of whether we are prioritizing when Rust is on the network and what our priorities strategically be. We can do a lot of this stuff, but if we are doing that, we are not doing something else.

Richard: One of the things to look forward for the Saitoverse if for third party developers getting involved and putting out their own apps. We’ve built mobile wallets before, and we think this is something that will either come organically through partnership or will be something we’ll prioritize when it becomes the best thing for growing an userbase and community.

Globalnode: Regarding Marketing/Promotion of SAITO, and the pending release of the full protocol. What’s the strategy of hiring internal marketing team member versus a PR firm or team to handle independently, potential larger reach and increased efficiency?

Richard: We are building a base capacity now, we need to make sure we have the ability to execute things ourselves or to instruct and work with a firm, where we need to, in a way that honors what the project is about and that’s effective. An example would be what we are doing with the Ultimate Saitozen, we need to find out the kind of fun outreach that gets any traction. What works for us and what doesn’t so that we can then start measuring metrics, etc. We don’t want to blindly spend tokens, because spending tokens means more whales, we can get more investors, but they are going to be dumping at some point.

Without throwing cash around in a silly way, how can we find out what’s worth spending money on that has a net positive effect in terms of getting the word out. In that sense, as a project rather than a company, I don’t think a large PR engine sits that comfortable inside the project so we might be more likely to use different thing and we might also be more likely to look to much more community-based ways of doing things organically.

David: What I see is that most of the PR firms in the space treat your token like a shitcoin and don’t focus on the fundamental value question. I would be open to hiring one, the challenge is that it’s hard to get people that understand Saito. I don’t think our growth strategy we can throw at a PR firm, what I’m hoping is that by generically adding support for cryptos much more easily, when that is rolled it will be a lot easier for people to understand the value of Saito because it will connect with third party cryptos in a tangible way. I’m hoping that the narrative that we have will get better moving forward and that will allow PR firms to understand us more easily. I don’t think we should do it for another two to three months because I think that the stuff we are talking about will happen by then.

Globalnode: Regarding UI/XD, what strategy is being implemented for the roll out of 2022 level web3 experience, with all the graphic bling, and usability requirements needed to put the SAITO NETWORK in the best possible light/position in the market?

David: The strategy is to make the games as best looking as we can, we bring in designers to improve on it within the structures of what they can do, and we see if integration with third party cryptos can get us promotion and integration into other crypto communities and spread that way. I personally think getting web3 cryptos integrated is more important than flashy design, but I’m perfectly comfortable with us hiring for graphic bling as well.

Richard: We should remember that the Arcade is principally a showcase to show what the network can do. The game stuff developed out of us asking ourselves “How do we get enough traffic?”, people doing real things in the network to test it and stress it. We got to be very careful about over polishing things, since that makes people think that’s the product. On the other hand, if it’s not polished enough, people don’t spend time with it, and we don’t get the usage and testing we need. Particularly with the Rust backbone and nodes running on Rust, with the extra capacity we get out of it, stressing them is going to be really hard.

David: We can get someone to redesign the site so that it looks better, but if they start touching the Arcade and the applications, then suddenly, we got more tech work that hits us. We are punching on this right now until Rust and web3 crypto integration are done because at that point we think we’ll have a better onboarding flow for people.

Greenweeny: Curious about what brought the team to Beijing? Any particular reason for choosing that city as your HQ?

Richard: David and I came to China before crypto. We met through the Bitcoin community in Beijing, so in a way we owe a lot to the community here, especially in the early days when it was pretty insane and cool. Right now, David is Thailand, some of the team is still in Beijing, but we are not operating in China. We are not a Chinese company; we are an international project.

Finesto: With so much exposure to China, how will Chinese regulation negatively affect Saito?

Richard: China’s regulations have the same impact on us as it does on other projects in that impacts Chinese users and what they can do. We are not DeFi or shitcoining like crazy, so we are not doing anything that the regulation is aimed at curtailing. For us, the impact has been mostly what the regulations have done to markets and people’s general attitudes in the industry rather than impacting us specifically as a project. Yes, we should be aware, as anyone that is here, and be very attentive to what the authorities are doing and the regulations, etc. but we are quite confident that’s not an issue.

Biko: This will be a very broad and open question, but what’s your main concerns about Saito? In the sense of development, tech, marketing, everything considering Saito. I can’t name a lot because I don’t understand the tech on such a profound level, hence my question to you!

David: for me, it’s that we are really struggling to get people to understand. We can explain the problem in a straightforward way, but because of the way the industry is, they don’t care. They don’t care about their blockchains having these problems, they are not interested in making solutions and that puts a greater burden on us. We can deal with it, but in means in some ways we have a longer roadmap because we need to make these things ourselves.

When people understand, they get very enthusiastic. You can see it with the people that have stuck around and really dug into the ideas over the last 3 or 4 there has been a realization of how people don’t understand these problems. It’s great for to see people coming around to our way of looking at things and acknowledging these are real problems.

Markus: Do you have any idea when I’d be able provide a Saito node? I’d love to play around with it. Also, is it theoretically possible to build my own JS Saito app?

David: You can run a Saito right now and you can build apps on it. If you don’t know how to do it, send an email to me at david@saito.tech and we’ll walk you through it. If anyone’s interested in this, let me know what you want to develop, because you can build and deploy and depending on what you want to build, we might be able to help as well.

For those who missed the live meeting, you can view the town hall recording here.