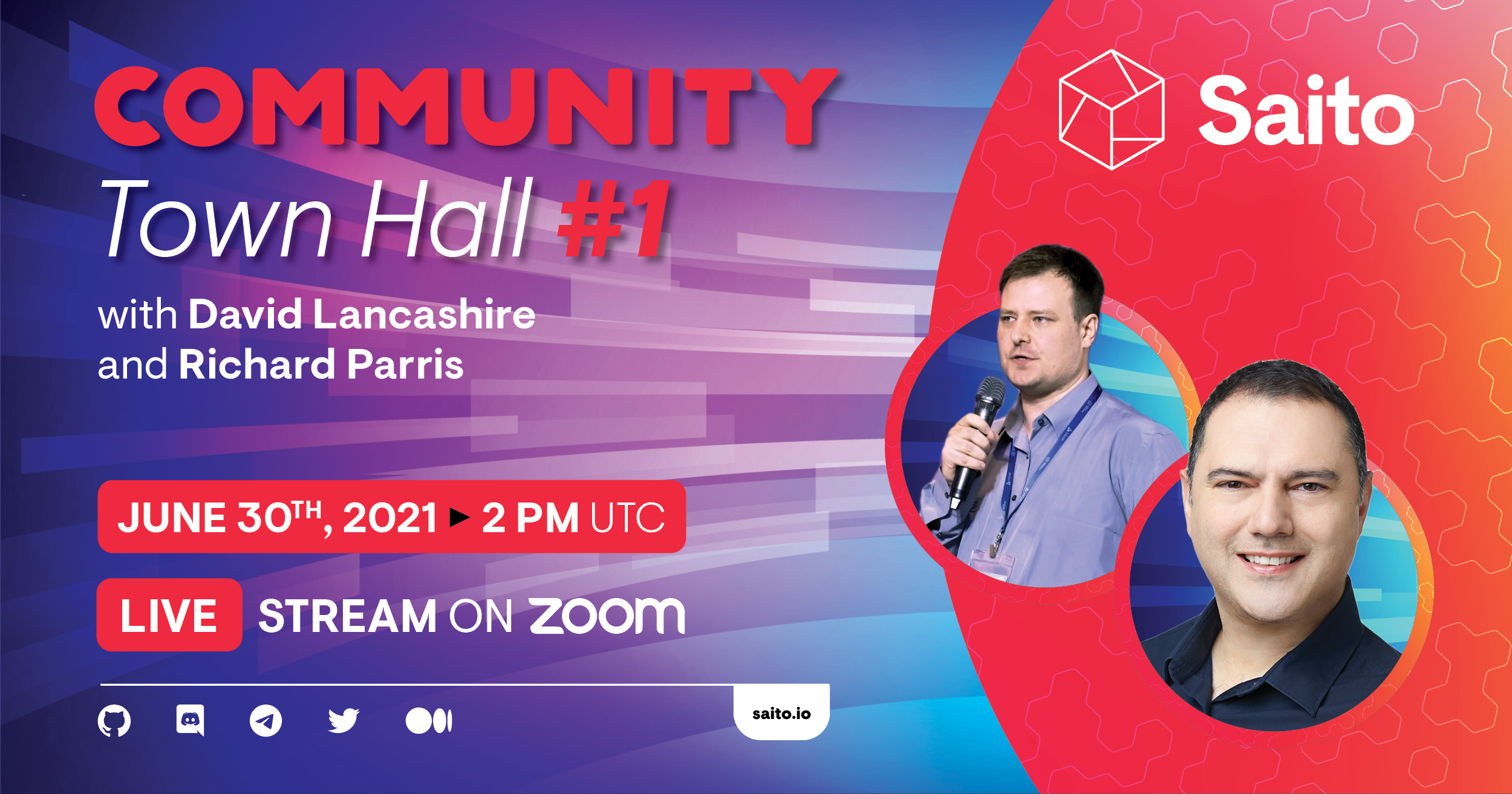 First of all, we sincerely thank everyone who participated in our first community town hall. We could say that it was a huge success and we genuinely enjoyed the event ourselves.

To those who didn’t manage to join, you can watch the town hall meeting here.

We’ve also prepared a summary key points & highlights for this Town Hall meeting. You can also check out the full transcript of the event on the next page.

1) What was the Saito Community Town Hall #1 all about?

The Saito Community Town Hall was a great opportunity for both of Saito’s Co-Founders to update and bring everyone up to speed on the general direction the project is going. They touched subjects such as partnerships and upcoming plans goals, Mainnet release, Saito consensus, and how it comperes and differentiates from Bitcoin and other projects.

You can check out our latest tech update to see what Saito have been working on to get a better idea on how things are going.

2) How are the Saito listings & partnerships doing?

These past few months has been great. Saito has been listed on multiple e

These past few months has been great. Saito has been listed on multiple exchanges such as Hotbit, Gate.io, Bkex, Decoin, Bilaxy and more recently Coincap.io as well as strategic partnerships and collaborations with the Mixin Network and the Elrond Network to name a few.

Saito does not really take the TPS as metric because it can easily be played One of the greatest challenges regarding scalability is the bandwidth. If you are on a network that doesn’t pay for infrastructure, you are trapped bandwidth limitations because people don’t want the infrastructure to become too expensive. With Saito, if you are running that infrastructure, you are getting paid, and so there’s no reason not to update. If we are talking about scalability of the network component, it’s an easy answer, as a network, we are paying for it, so we are expecting people to have the money to upgrade and we are expecting that they are going to want to upgrade, because if they upgrade, they can process more transactions and make more money. So it’s kind of like a business on-ramp, where you can kind of start small and then you can grow, because growth and providing services gives you more income to grow.

4) What kind of partnerships does Saito need to succeed in mainnet?

We can’t go to mainnet yet per se until Saito Rust is done. The reason for this is that there are a couple of network settings like the block time and how much of a chain reorganization we’re able to get away within 30 seconds and other stuff like that – we wanted to be actually pushing tons of transaction through the system before we make final choices.

With that said however, anyone can already deploy their own application on network.

Our priority right now is that we need to be entirely sure that we can guarantee token persistence to ensure the safety of everyone’s tokens in the network.

Once Rust client is up and going, we will start to work on that.

Once Token Persistence is achieved it will only be a matter of time before we have staking.

7) What is the need for patenting the routing methodology?

It may seem odd the the project dedicated to openness has done that.
The main reason for this is to prevent the technique to be used by other I think the it can seem odd that the project dedicated to being open has done, that but our primary reason there is to prevent the technique being used by consortia and other chains in a way that can undermine the public network, the patent will allows us to control how third parties, for instance companies, etc, could make use of the patent to make use of routing work and possibly even use that control to make them fund or support development on the open source network

8) How can the general public / community do help raise awareness for Saito?